Honolulu attorney Megan Kau is running to head the prosecuting attorney’s office where she was once a deputy.

The 42-year-old lawyer worked for the office from 2006 to 2010, then worked for two private firms and opened her own practice. She said current employees in the office encouraged her to run.

“The current administration has discriminated against them, retaliated against them and asked them to do unethical things,” said Kau. “I am here to put a stop to all of that.” 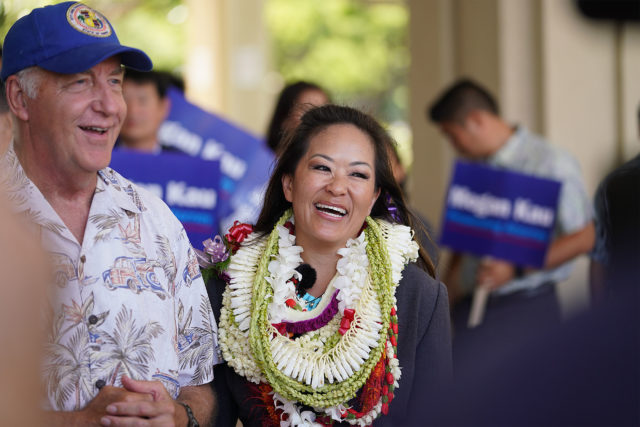 Kaneshiro has been on paid leave since March after he received an FBI target letter, and he is currently fighting an impeachment petition in court. The U.S. Justice Department’s corruption probe involves two of his deputies: Katherine Kealoha and Chasid Sapolu. Kau has criticized Kaneshiro over allegations that he retaliated against two women who testified against him to a grand jury.

Kau announced her candidacy alongside Peter Carlisle, a former mayor and prosecuting attorney. Kau represented Carlisle earlier this year in a court petition to confirm his eligibility to run for his old job, but on Tuesday, Carlisle said he is dropping out of the race to spend more time with his wife.

“We need to be able to get beyond the kind of conflicts that we have right now, and we have to get to a point where the corruption is gone and the healing begins,” he said.

According to Kau, Carlisle first approached her to run for office in 2015, and she said no because she loved her private practice and she didn’t want the public attention on her private life.

“I am not a politician,” she said. “But I can no longer stand by and do nothing.”

Besides Carlisle, Kau has represented several high profile clients. She was recently appointed to defend Jennifer Estencion, who along with her sister and brother-in-law, disgraced former union boss Brian Ahakuelo, is part of a 70-count federal indictment for conspiracy, wire fraud, money laundering and embezzlement.

She also represented Albert Lee, a fired Honolulu police officer who alleged he faced retaliation from former Chief Louis Kealoha and his prosecutor wife Katherine Kealoha after he arrested Michael Miske, a local businessman with a criminal history.

Kau, who is also a certified public accountant, is among the first candidates to announce her run for prosecutor. Former deputy prosecuting attorney RJ Brown, who used to work for Civil Beat, has raised nearly $27,000 since April. Several others are considering entering the race including former Oahu 1st Circuit Court Judge Steve Alm and Honolulu Police Commission Chair Loretta Sheehan.